THE Atlantic wind is gusting against me as I propel myself through the water aboard my kayak.

My destination, Sancti Petri castle, looms ahead, beckoning me on, but the sage advice from the experts who rent out the kayaks is beginning to prove true.

Insisting it would be ‘impossible’ to kayak out to the castle in this wind, I soon give in to spend my time pootling around the charming and chilled-out bay instead.

After all, there are boat trips to the castle where the chance of capsizing is significantly lower.

A delightful sight to behold, Sancti Petri castle sitting on an island just offshore is steeped in history.

Legend has it that the island was once home to the temple of Hercules, arguably the most important religious building in the ancient world.

Hercules’ legacy survives today through a statue at the marina entrance and – as if that wasn’t enough – a street name.

Meanwhile, Roman emperor Julius Caesar is said to have had a dream which foretold his domination of the world while staying at this very castle.

It certainly has a lot to live up to, and there is still a magical, somewhat eerie air about the ruined remains.

But in this charming little corner of the Costa de la Luz there is much to discover.

Kayaking, sailing, kitesurfing and all manner of watersports are on offer in the marina, along with numerous soft sandy beaches.

It is also well worth visiting for the seafood, brought in daily by the salty, old fishermen who know these seas even better than they know their poor wives.

Scrumptious, no-frills fish, squid and prawns are served up by Sancti Petri marina’s Club Nautico, along with many other bars and restaurants in the nearby town of Chiclana de la Frontera.

While it is not exactly a tourist hot-spot, a large amount of expats do surprisingly live in the town’s satellite area of Pago del Humo.

In Chiclana they find everything they could need in terms of shopping and business, while in Sancti Petri, and nearby Barrosa beach, they have stunning coastline.

In fact, life seems so good for those unafraid to ditch the Costa del Sol for the Costa del Wind that by the time I’d finished gorging on seafood, I had to drag myself away… and only half of that was because of the wind blowing me in the other direction. 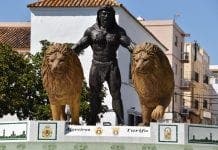