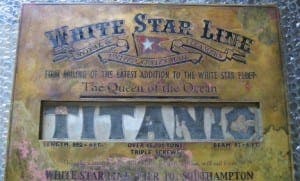 A RELIC commemorating the launch of the Titanic has resurfaced in Spain after being ‘lost’ for nearly a century.

A plaque presented by the Royal Mail Steamship Union, the day before HMS Titanic began its fateful voyage has miraculously turned up in Granada.

Weighing 1.8kg, the whereabouts of the silver and bronze plaque had been unknown until it was revealed this month.

A Barcelona man claims to have bought the plaque from an English art dealer 12 years ago.

He had no idea of its importance and merely bought it as a present for his grandson.

The grandson, who runs an art dealership in Granada, has now offered it up to Spanish Titanic Foundation to be displayed in an exhibition at the Granada Park of Sciences.