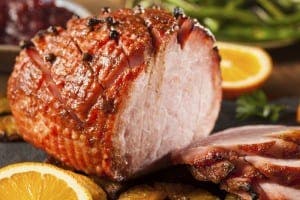 THE old adage ‘don’t knock it until you’ve tried it’ has never been more apt.

Because this Christmas, tasty shortcuts are the order of the day so you can consecrate more time to the important things… like necking bucks fizz and unwrapping presents.

The sweet drink infuses the meat keeping it incredibly moist and succulent without it being identifiably ‘Cokey’.

Forget the turkey and scorn the nut roast, because gammon is a crowd-pleaser with heaps of flavour, and it really lasts.

Pair it with elaborate potato dauphinoise to impress your guest, then hoover up the left-overs with a baked sweet potato or alternatively a fresh carrot, celery, apple and walnut salad to bring the new year in with a healthy kick.

Two important tips: don’t even think about using diet coke – it’s full-fat or nothing, and be sure to remove the cloves before you tuck in!

Peel and cut the onion in half.

Put the ham in a large pot with the onion and pour the Coca-Cola all over it.

Over a medium-high heat, bring the Coke to a boil. Then, reduce the head to medium-low and cover with a lid, leaving it partially ajar and allow to cook for 2 hours 30 mins – leave one hour for every two pounds.

Preheat the oven to 240 degrees Centigrade.

Remove the ham from the pot, leave to rest on a chopping board and reserve cooking liquid.

Trim the skin with a sharp knife leaving a thin layer of fat on the ham.

Score the fat diagonally with the knife to resemble large diamonds.

Pierce each ‘diamond’ with one clove

Next, spread the treacle over the skin, watch out for the cloves, before gently patting the mustard and sugar on to the sticky fat.