HALLOWEEN continues to grow in popularity in Spain. 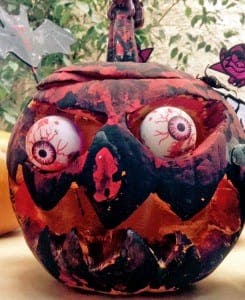 For Spain, this celebration is far from traditional. It has been imported in recent years owing to the influence of other countries. However, this does not mean that it is an event to be missed. Experiencing Halloween abroad is a once in a lifetime opportunity.

Halloween, or All Hallows’ Eve in the past, has been adopted by both the schools of Spain and the general public.

A sure sign that the ghosts are on there way is first witnessed in the local schools. Amongst them is the Institute of Secondary Education Santa Isabel de Hungria, which runs a pumpkin carving event every year.

Among the contenders, one Pumpkin was covered in black paint and had wings attached to turn it into a bat, whilst another was dripping in red blood as eyeballs descended from its empty sockets.

“The children are very excited about Halloween because this is something new for them”, commented an English teacher at the school.

Halloween only reached Spain recently. It draws its origins from the Celts living in Europe around 2000 BC. Occupying Northern France, Great Britain and Ireland they celebrated a festival called Samhain every year. In it they donned costumes and lit bonfires to ward off wandering ghosts. They thought that it was the day when the dead returned to attack their livelihoods, but came out in celebration because it also supposedly allowed druids to predict the future.

Although it hasn’t lost the costumes, the futuristic undertones have disappeared.

Come 8pm on the night, the first miniature vampires and skeletons start to appear, on their mission for sweets. They are accompanied by a much larger ghost whom ensures that any tricks are avoided.

The nightlife of Jerez also puts on a show. Many bars festoon their walls with cobwebs, spiders and bones. El Rincon in the North of Jerez created a Halloween tunnel this year for visitors. you had to walk through, drink in hand, ducking past the spiders and swerving to avoid the whirring chainsaw.

“It was pretty terrifying” whispered a shaking Erasmus student.

Having survived the bars, if you feel like heading out to the clubs the ghouls will come too. Like their miniature skeleton counterparts and school chums, the young generation of Jerez has not forgotten their past fun.

Hanging wads of skin off the side of your face proved to be a particular favourite, or going for something a little more outlandish. Two people headed out La Comedia dressed as Bananas.

Be prepared for large queues. The vast majority of Jerez’s club savvy population will be out. Crowding together is rumoured to keep the Frankensteins at bay.
Halloween in Jerez is not something to be missed. The chance to revel with nightmare-esque monsters and see some of the most fantastic pumpkins is always appealing. As well as the chance to really get to experience a popular event in a different culture.

You’ll be sure to have a fantastically frightening night wherever you end up.

El Alamin: The abandoned town outside Madrid that attracts ghost hunters in search of paranormal activity

Halloween: These are the ten most haunted houses in Spain