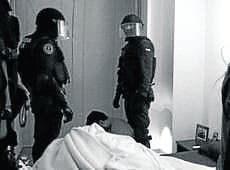 A SOUTH American gang has been dismantled by Spanish police investigating the murder of an American man who was shot dead.

The man was found dead tied to a chair in a Mijas flat in May.

Guardia Civil arrested 14 Colombian and Cuban nationals, 13 of whom were sent to prison, during the operation in Malaga, Madrid, Toledo and Guadalajara.

Three firearms, a silencer and 32kg of cocaine were also recovered.