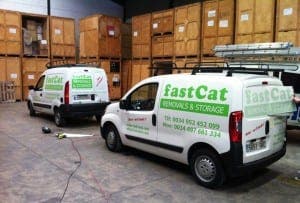 MILLIONS of euros of prized possessions thought stolen by conmen have been found.

Over 50 missing containers were discovered after they disappeared from British-owned storage warehouse Fastcat earlier this year.

While police are still trying to track down boss Eddie Hardy and previous owner Peter Gibson, the personal items have been located near to the old warehouse in Coin.

The ‘lost’ containers were discovered by British expat Lisa Howard at another storage facility, just 10 minutes away.

Howard is now in the process of uniting dozens of expats with their containers.

However, time is running out, with the other warehouse’s landlords looking to sell up within the next couple of months, due to unpaid rent.

“I have been able to reunite five people with their belongings with two more coming this month to claim their stuff,” Howard told the Olive Press.

She added: “There must be at least 20 more containers in there though and I would urge people to get in touch quickly.”

One victim reunited with her worldly belongings, Jean Newall, 63, said she is ‘over the moon’ to have her things back.

“I had my life in there,” she told the Olive Press.

“Important paperwork, old photos which mean the world to me, and sentimental items which are irreplaceable.”

In September, the Olive Press revealed how a British lorry driver had been arrested in Dover, UK, after unwittingly transporting a Fastcat container with 33kg of cannabis inside.

Meanwhile, last year, the company came under investigation after €2.8 million worth of cocaine was found in a container.