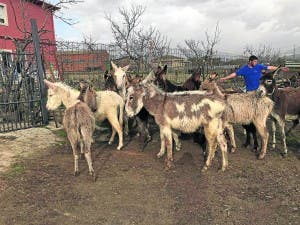 ONE hundred donkeys abandoned and headed for the slaughterhouse have been rescued by a donkey sanctuary.

In the Refugio del Burrito’s largest operation to date, the severely malnourished donkeys were recovered from terrible conditions in a village in Extremadura.

The owner had recently died and the animals were not registered, meaning they would have to be slaughtered.

But staff at the charity, based in Fuente de Piedra, contacted local authorities and took control of the donkeys, bringing vets and food.

Despite their swift action, several donkeys still died from the suffering they had undergone, including four-year-old Momo who died after an emergency blood transfusion.

“We have launched an urgent appeal to find homes and to cover the costs of the operation,” said a refugio spokesman.

“Those that have adequate facilities and wish to own donkey, please contact us.”
For more information or to donate, visit www.elrefugiodelburrito.com or call 952 735 077