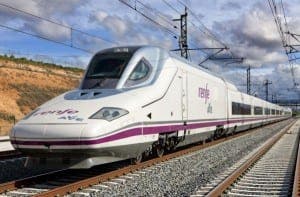 THE cost of Spain’s high speed railway set to be built in the near future has been calculated at €27,000 million.

To date, the country has already poured €70,000 million into its AVE service, while each kilometre of track costs €11 million to build and €150,000 per year to maintain.

While an El Pais article claims ‘no Spanish AVE line is profitable’, hotel stays appear to have dropped by 8% in cities connected by the service according to the Foro del Transporte.

EXPLAINER: What you need to know about Spain’s free rail travel scheme from September 1