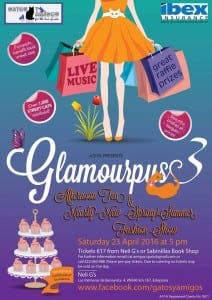 A SOLD-OUT fashion show raised more than a thousand euros for an Estepona-based animal charity.

The Asociacion Gatos y Amigos’ Glamourpuss 3 event, the third of its kind since last year, raised €1,300.

Sponsored by pet insurance company Ibex and held at Neli G’s restaurant in Benavista, guests were treated to an afternoon of tea, live music and Fashion.

The clothes were donated by supporters of the charity, 66 of whom packed out the restaurant.

The show had sold out of tickets two weeks in advance.

Representative of the charity Melissa White told the Olive Press despite the success, they fear they may have to close at the end of the year if they cannot drum up more interest and support.

The charity is only three years old, but has helped neuter more than 1,000 street cats and rehomed hundreds of cats and kittens.