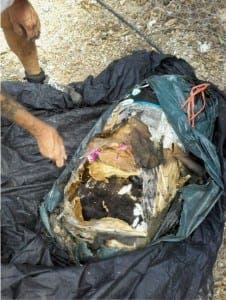 A GRUESOME scene of decapitated cats and dogs has welcomed a British expat to her new home.

Mother-of-three Kerry Matthews was appalled to discover at least 13 dead animals, some with their throats slit, on taking possession of a new rental home, in Antas, Almeria.

She is now calling in police, after finding several other animal skeletons around the garden.

“It’s not the kind of thing you can forget, there were maggots everywhere and even dead puppies – it is heartbreaking,” Matthews, 56, told the Olive Press.

The Essex woman, who has lived in Spain for 15 years and previously ran her own animal fostering centre in Albox, took the bodies to Garrucha vet for cremation.