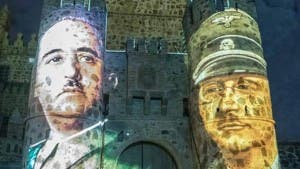 A SPANISH town has been criticised after it projected the faces of Francisco Franco and Heinrich Himmler onto its castles during a festival.

Guadamur in Castilla-La Mancha said the images were designed to tell the story of the provisional Vichy government’s negotiations for the recuperation of the Guarrazar treasures.

Franco had negotiated for the return of the treasure – Visigothic crowns and gold crosses – with the Marshal Petain during WWII – which is what the projection intended to show.

Residents, however, felt the images honoured the former Spanish dictator and Nazi officer.

The town hall said in a statement: “It was never the intention of the organizers, the documentary maker or collaborators to praise the people… or the actions of their governments,

“The town hall of Guadamur would like to apologize to those who were offended by any of the images shown.”