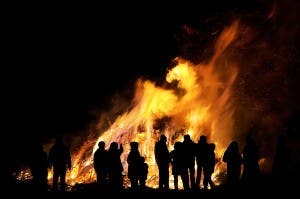 WHILE Brits glue themselves to the TV to await their nation’s fate, Spaniards will take to the beaches to leap over burning piles of wood.

That’s right, the EU referendum falls on the same night as San Juan, when all burning questions will be answered.

Will you be happy, will you be rich, will Britain be IN or OUT?

As date clashes go, bonfires and Brexit (or hopefully not) add up to a cracker of a night.

Burning pyres, fireworks and a dash of paganism make this torchlit beach party one of the most exciting Spanish fiestas.

Taking place in every major town and city along Spain’s coastline, hoards of revellers eat, drink and dance the night away in celebration of midsummer night.

Last year was my first taste of ‘the festival of fire’ in Casares Costa and the extraordinary evening was an eye-opener.

I watched from Playa Ancha as the night got underway with a massive bonfire which saw wooden huts yield to 10 foot flames.

Effigies representing Judas Iscariot are also committed to the fire.

The ritual’s rules and traditions are what make San Juan such an iconic night on Spain’s summer calendar.

Although the religious relevance of the festival now plays second fiddle to having a splashing good time and a midnight dip is high on the agenda.

In the midst of the burning fires, scores of fiesta-goers strip to their undies and take the plunge in the name of tradition. 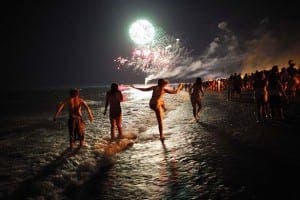 Legend states that after midnight, people must wash their faces and feet three times in the sea to be granted three wishes, wash away evil spirits and enjoy a happy year ahead.

The first of my three dips last year was refreshing, but the second and third took all the courage my goose-pimpled body could muster in the chill midnight air.

But if an almost skinny-dip in la madrugada leaves you cold (and it will) then what follows will rekindle your enthusiasm.

With the bonfires dying down, smaller piles of wood are pulled to one side for jumping over.

Everyone’s hot to trot because if you vault the bonfire three times your problems (if not your panties) will disappear in a puff of smoke. 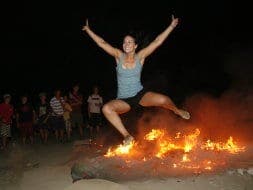 With these traditions satisfied, it’s time to party.

A feast of musical acts took to the temporary stage on Casares’ beach last year, and similar entertainments are laid on tat beaches nationwide.

This year, things kick off in Casares at 8.30 pm with children’s entertainment followed by a flamenco and ballet performance.

Bonfires or Brexit – no contest, I know which gets my vote. And anyway, when you roll home in the wee small hours they’ll still be counting ballot papers.