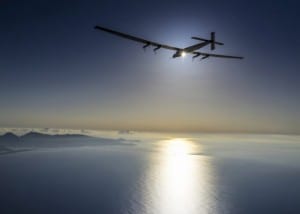 THE first transatlantic crossing in an aircraft powered entirely by sunlight landed in Sevilla this morning.

Solar Impulse came from New York to Andalucia’s capital after two days and 23 hours flying over the Atlantic, a distance of 5,288 km.

The zero-fuel plane has completed its 15th stage in the ambitious journey around the world.

Swiss pilot Bertrand Piccard who lead the project made good progress when leaving New York and now needs to plot a route to Abu Dhabi where the adventure started in March last year.

Sevilla was chosen as the safest option for landing as the forecast for Paris was storms.

The highlight of Solar Impulse so far was a four-day, 21-hour leg over the Western Pacific – the longest solo flight in aviation history.

Repairs lasting 10 months have caused a delay to the trip but the project was aimed to demonstrate what solar power can do.

From Sevilla the plane if North Africa bound.