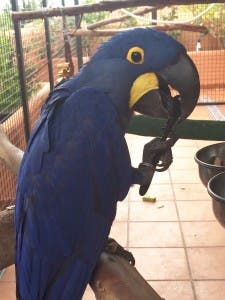 A MISSING parrot who thought he was a night owl has been found propping up the bar at a popular disco.

The night literally flew by for a Hyacinth Macaw, named Soly, after he escaped from his cage in Marbella.

Expat owner Richard Breuer, 40, immediately got onto the Olive Press after discovering he had gone missing from his home in Sierra Blanca.

The property developer was left ‘panic stricken’ after the pet – worth €14,000  – vanished while he was moving to a new apartment nearby.

But despite calling out a search party, putting up posters and calling police, the blue and yellow bird was literally nowhere to be found. 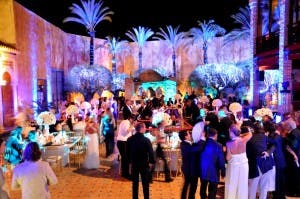 Then out of the blue, later the next day, Olivia Valere, owner of the exclusive nearby nightclub of the same name, phoned to sayl that Soly was propping up the bar.

“We were so relieved,” said Richard. “He was a bit apprehensive after we took him home, it took him a couple of days to come back down to earth.”

Luckily, a barmaid phoned Olivia, who has her own collection of birds, after Soly flew into her lap at the club.

The nightclub owner came and took the partying parrot to her aviary in her Guadalmina Baja home, where Richard later collected him.

“He’s a very friendly parrot who likes the ladies and he’s very approachable, we’re very  lucky he was found,” said Richard, “There are many who would have stolen him for the money.”