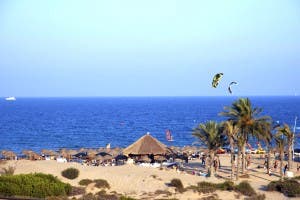 was rushed to hospital after a shark attack at a crowded beach on the Costa Blanca on Friday.

According to lifeguards, the 40-year-old Elche resident came out of the sea with a bloody hand after being bitten while swimming.

Red flags were raised at the Arenales del Sol beach in Elche as authorities were forced to ban swimming.

The man was taken to the hospital for stitches for the “serious bite”, according to a spokesman at the DYA ambulance service.

The red flags were kept in place for about two hours until bathers were allowed back in the water.

It is believed that the culprit was a Blue Shark, a species that rarely bite humans.

It is only known to have been involved in 13 biting incidents, four of which ended fatally.