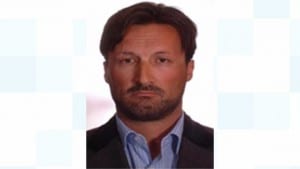 By Laurence Dollimore and Rob Horgan in Murcia

AN Olive Press investigation has found traces of most wanted fraudster Mark Acklom in Murcia.

The 43-year-old lothario has been involved in a series of property scams around the area, alongside his Spanish wife Maria Yolanda Ros Rodriguez.

Using the names Marc Ros, Mark Ross, Zack Moss, Dr Mark Ros and Don Marc Ros, he is believed to be behind numerous scams, mostly in Murcia and on the Costa Blanca.

But now his time is apparently running out, after being named on a list of Britain’s Most Wanted fugitives.

The conman is being sought over his defrauding of a an ex-girlfriend in the UK out of €950,000.

According to Crimestoppers, he convinced Carolyn Woods, from Gloucestershire, he was an MI6 agent before persuading her to lend him an initial €29,000.

“He told me he had never felt this way about anyone and that we must get married,” said Woods, 55, “In the end, I lent him everything.”

Privately-educated Acklom is said to have started his fraudster lifestyle as a child, when he stole his mother’s mink coat to sell for a fast buck.

At 16, he stole his father’s American Express card and racked up a €12,000 bill before posing as a stockbroker in a €1.2 million fraud.

Despite spending more than ten years of his life behind bars in the UK and Spain, Acklom, from Bromley, hasn’t been able to change career paths.

He first came to Spain in the late 1990’s, and by 1998 he served two years for a fraud involving unpaid hotel rooms.

He was arrested again six years later in Benidorm for a con in which he posed as the head of a real estate consortium, when he did not own the land he said he would build on.

When he next appeared in court in Switzerland he claimed to be married to Spaniard Maria Yolanda Ros Rodriguez, who was pregnant with his child.

An investigation has tracked her down to Murcia, where locals told the Olive Press she has recently launched a luxury estate agents, which also operates in Madrid, after leaving her sales post at La Manga golf resort.

It is not clear to what extent she was involved in the fraudulent behaviour of Acklom.

Acklom vanished after being released in March of this year and there is now a European Arrest Warrant on his head, as well as a €22,000 reward for his arrest.

A source told the Olive Press he has good reasons to be hiding out in Spain.

“Mark bought gold bars as a form of insurance. They’re buried under a friend’s garden in Spain – so if he loses everything he can dig them up.”