AN emergency centre has been set up in Sabinillas for victims of today’s floods.

Much of Sabinillas and neighbouring Estepona has been left under water following 24 hours of rain.

Sabinillas has now been declared a ‘disaster zone’ and remains on red alert with more rain forecast for this evening.

Many people have been forced to leave their homes due to the severe floods.

Tragically, one woman has been reported dead after becomming trapped in a basement.

People needing to be relocated are being urged to go to the local police.

Meanwhile, an office room in the town hall has been turned into an emergency centre for victims to report damage.

A townhall spokesman said: “The town hall would like to show solidarity to the victims.

“We are urging people to follow instructions given by the emergency services.”

He added: “Until the rain has passed do not leave your houses.” 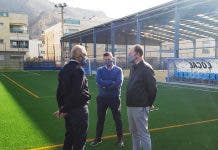