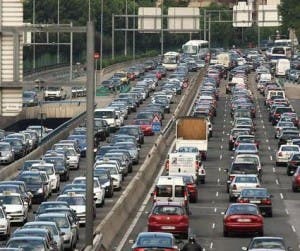 MADRID is to ban half of all private cars from its roads in a bid to tackle air pollution.

The capital’s city hall announced that from 5.30am to 8pm, ‘vehicles with even-number registration plates will be allowed to drive around on even-number days and cars with odd-number plates on odd-number days’.

The ban, known as road space rationing, will now be activated whenever the level of harmful nitrogen dioxide in the atmosphere goes above 200 microgrammes per cubic metre in at least two measuring stations for two days running, and if the air is unlikely to clear imminently.

Mopeds, hybrid cars, those carrying three people or more or used by disabled people are exempt from the ban. Buses, taxis and emergency vehicles are also exempt.

Depending on pollution levels, the decision will be revised daily.