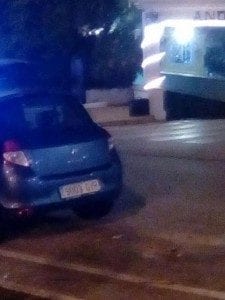 A BOMB scare in Puerto Banus was a false alarm but very mysterious.

Police have confirmed to the Olive Press that the black briefcase left by the side of the road in the Playas del Duque area of Puerto Banus contained ‘old clothes.’

They confirmed the bomb squad had sealed off the area late on Tuesday night after the discovery of a suspicious ‘package.’

The find came only one day after two other suspect packages were found in Sevilla and Barcelona, where the World Trade Center was evacuated.

In Sevilla, the briefcase was reportedly found to have just paper packed into it.

Explaining their findings, a spokeswoman for the police said: “It was a false alarm.

“We were called out to investigate and police found that it contained old clothes.”

The incident happened within an hour of an explosion in an apartment in San Pedro, which led to considerable panic among locals and tourists in the area.

One onlooker said: “dozens of people came out onto the street after the explosion and there was panic and concern.

“We could clearly see smoke coming out of a window.”

It was put down to the explosion of a gas canister, which left one man with serious burns and others needing treatment.

Spanish officials have bolstered security measures across the country to keep people safe during the Christmas and New Year period.

Tonight, for the Cabalgatas de Reyes parades, trucks and buses have been banned in Madrid and Barcelona.

Alex Trelinski - 8 Aug, 2022 @ 15:00
A couple have been arrested in Alicante for taking their dispute with a woman too far when they posted her details on a dating...