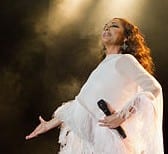 SHE got a big slap on the wrist and spent a year in prison.

But it has not apparently stemmed singer Isabel Pantoja’s popularity.

Just months after being released from a sentence for corruption and money laundering ‘la Pantoja’ has got a gold disc for her new album.

However, sales are slower than her previous album Diez Boleros released in 2006 with critics claiming this shows her success is on the wane.

The drop is more likely however, due to the amount of streaming and illegal downloading in Spain.

Pantoja, 60, served just over half of a two-year sentence as an accomplice of convicted fraudster and money launderer Munoz, who remains in prison.