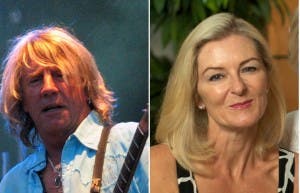 ROCKER Rick Parfitt froze his wife out of his will just five days before he died.

The Status Quo singer, who once claimed he spent more than €1,000 a week on cocaine, is said to have left wife Lyndsey with nothing despite her overseeing his care in his final months.

According to expat Lyndsey the pair had fallen out over the Marbella-based singer apparently rekindling his relationship with ex-wife Patty.

Speaking for the first time since his death, she revealed how she was dumped over the phone in October, after she had found emails between the pair, which showed intimacy.

“I’ve been such an idiot,” Lyndsey said, “Looking back at the way he lived I think I was a fool to think I could tame the wild man of rock, as he was known.”

Although they had been living separately, they ate breakfast together every morning and had planned to spend Christmas as a family.

“We were not estranged at the time he died, but had talked about getting back together.

“He has left me nothing,”she insisted, “I’m going to have to take the children out of their private school and get a job, we’d have no food without my mother’s pension.”

Parfitt died at 68 in Marbella after suffering a severe infection he is said to have caught while in hospital.