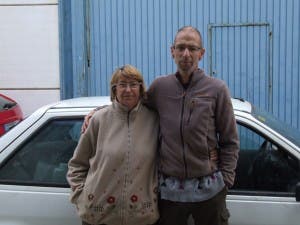 A HOMELESS couple have received much needed financial help thanks to an Olive Press story.

Leslie and Paul Dunt, who were left sleeping between their car and a shed, have been offered €500 by good samaritan Joel Kennedy who read about their plight last issue.

Kennedy, who runs the Help the Homeless Costa del Sol Facebook page, said the money had been left over from a recent group fundraiser.

Paul will put the money towards a deposit for a flat, which they are in the process of looking for.

“If it wasn’t for groups like this and people like Joel, we wouldn’t be as close to finding anywhere,” said Paul.

“We are very grateful to Joel and his group for their generosity and support.”

Cristina Hodgson - 9 Dec, 2022 @ 08:45
AEMET, the State Meteorological Agency, has upgraded the weather warning to orange alert, in place due to torrential rain forecast throughout the whole province,...