But surprisingly few people know about the fascinating life of Alexander Fleming’s granddaughter, Penelope Fleming, who made Andalucia her home.

The daughter of esteemed crime author Joan Margaret Fleming and Harley Street eye surgeon Norman Bell Beatie Fleming was also sister to UK Green Party developer David Fleming and a renowned artist in her own right who found fans around the world.

Now, her long-serving Moroccan carer has revealed the true story of the talented Brit who spent the last 30 years of her life in Cadiz province’s tiny village of San Pablo de Buceite.

Jamal Benblal Zayout, 30, is the sole beneficiary of the estate of Fleming, who died in February 2016 in La Linea Hospital of a suspected heart attack. aged 83. 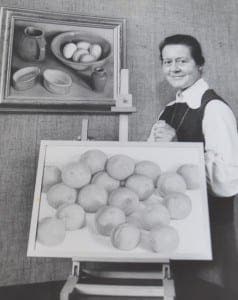 Initially unbeknownst to him Fleming, who is buried in the San Pablo Buceite crematorium, enjoyed an illustrious career as an artist whose work was sought-after in Gibraltar and worldwide.

“She was a truly talented woman,” said Zayout, who still lives on Fleming’s country estate where she lived from the late 1980s.

From Morocco, he was sought out as a carer by Fleming around 13 years ago, who had a fascination with the country.

“I had no idea who she was when I first started working for her.

“I knew nothing about her art or her grandfather.

“She did not really paint by that time due to having problems using her hands so I only found out about her art gradually as I gained her trust.

“The breadth of her work was fantastic.

“She loved to paint landscapes. One of the reasons she came to live in Andalucia, aside from the climate and lifestyle, was the beautiful surroundings.

“She told me she had painted since she was a child and worked in all manner of mediums, from oils to pencil drawings.

“She created hundreds of paintings, maybe 400, during her career and was considered unusual because she used to paint with her left hand.

“A lot of very well-known people from England and the art world would come to the house but I didn’t know who they were. She was very well-regarded in the art world.

“Her buyers came from places as varied as England, Gibraltar, France, Morocco and Germany.”

Along with her remaining paintings, Zayout closely guards a folder that contains scores of articles illustrating her exhibitions, held everywhere from London to Istanbul.

“She travelled very widely, which suited her as she had a love of visiting different countries, especially places like Iraq and Turkey.

“Even though she didn’t paint while I knew her, I travelled with her to many places where she was still holding exhibitions.

“We went everywhere from La Linea and Gibraltar to Morocco.

“She had a big exhibition in Tangier and we also went to my home town of Sidi Kacem five times.”

As Zayout and Fleming’s bond deepened, he also learnt more about her family’s fascinating past.

“It was around seven years before I found out who her grandfather was but after she opened up to me she would refer to him often.

“She said Alexander was the best man and doctor in the whole world.

“She was also very proud of her brother David, a leading green thinker who wrote a lot of books. I still have them, along with those of her mother who wrote Deeds of Dr Deadcert which was turned into the Rx for Murder film.

“But Penelope was also a writer in her own right. I have kept her work safe but unfortunately I have not been able to read it as it is written in English.

Fleming tasked Zayout to sell her remaining paintings following her death and gave him permission to keep the proceeds.

“A Gibraltarian gentleman is currently interested in buying her whole remaining collection, but I can’t disclose who,” said Zayout.

“She was just a wonderful person to be around, so very good and kind.

“She was the best person in the world and was as important as my mother to me.

“She never married or had any children of her own and told me I was her son.

“She was always concerned about me and was holding my hand when she died, I miss her so much.”

VIDEO: Police in Spain’s Andalucia swoop in on ‘dangerous fugitives’ wanted in Germany for murder