HE was one of Andalucia’s best-loved artists.

But few expats and holidaymakers today have heard of George Campbell, the Irish artist who was anointed Knight Commander of Spain for his influence on Malaga’s bohemian cultural scene during the 1960s and 70s.

Yet that could all be about to change thanks to Andalucian media company Cedecom, which has published an English language documentary about the much-loved painter on YouTube.

Called ‘Looking for George’, journalist and friend Antonio Sierra traces the life of Campbell, a ‘master of cubism’ originally from County Wicklow.

Filmed in both Ireland and Malaga, it features many of his friends, his impressive oil paintings and the Iberian haunts that inspired them. 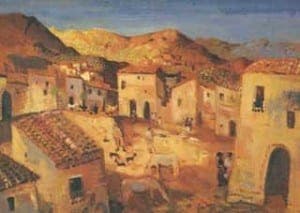 It also logs his obsession with Malaga where Campbell, who also created stained glass windows for Galway Cathedral, spent half of each year after becoming enchanted with the city during his first visit in 1951.

“He detested the Irish and would count the days until he could come to Spain,” said one unnamed friend in the 50-minute film, which was originally posted on the video-sharing website in Spanish.

The Malaga district of Pedregalejo in Axarquia and countless other white-washed villages were among the greatest influences on Campbell, who was said by critics to have brought ‘modernism into provincial scenes.’

He painted most of his canvases back in Ireland, where he also exhibited much of his work, becoming a full member of the Royal Hiberian Academy in 1964.

This left him free to visit his favourite haunts, which included two bars – Bolivia 41 and La Buena Sombra – and a nearby art workshop. 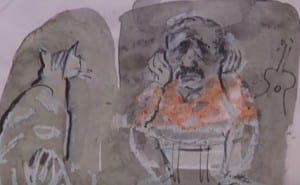 There he met dozens of Spanish and foreign artists such as Stefan Van Reiswtsz, Jorge Lindell and Albert Meagle, creating murals for the drinking dens’ walls and perfecting his flamenco guitar-playing skills.

“He would spend all night gathering musicians,” said Van Reiswtsz.

“You would wake up and they would still be playing. “They were mad nights.”

A generous man, he would let his friends choose pictures from his portfolio to hang on their walls for free.

His talent earned him the Irish Douglas Hyde Gold Medal in 1966 and the Oireachtas Prize for Landscape in 1969, while the then Spanish government made him a Knight Commander in 1978.

His 1979 death from a brain haemorrhage in Dublin at the age of just 62 iwas lamented by other artists.

“He died so young and was at the height of his powers,” said Manus Walsh.

“He should have had another 20 years.”

His legacy was commemorated in Malaga in 2002, when local councillors unveiled the Glorieta Jorge Campbell roundabout in his name.