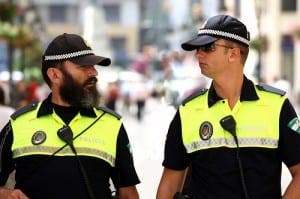 SPAIN has doubled its police officers in tourist areas to 2,639 in a bid to guarantee the safety of tourists and locals.

It is the largest ordered deployment by the Interior Ministry since 2011 and the additional officers will work across the country, including in Madrid, Andalucia and the Canary Islands.

The deployment is double the 1,227 officers in the country who watched over holidaymakers last year.

Interior Minister Juan Ignacio Zoido said: “With this, we are confident that all Spaniards and foreigners can enjoy their holidays safely and without having to worry about having a good time and rest.

“We want to offer more and more security to the tourist.”

The AlertCops app has also been introduced, which lets holidaymakers communicate with Spanish security forces in a hundred languages while also allowing them to send photos and video to help them investigate a crime.

Zoido said authorities will also invite police officers from the French, Italian, Dutch and Romanian police to patrol with the Spanish cops.

He said: “We want to continue making Spain an increasingly safe country and a perfect tourist destination.”

Former chief of intelligence Lieutenant-General Francisco José Gan commented that ‘no one is safe’.

He said: “I do not say that Spain is safe, I say it is better prepared because we learned in a very traumatic way.

“No one is safe, but perhaps we make it more difficult for them than others.”

Spain has not had a terrorist attack since the devastating 2004 Madrid bombings.

Authorities have made 700 terror-related arrests since.

The British holiday favourite is touted as one of the safest destinations.

Cristina Hodgson - 3 Dec, 2022 @ 10:30
Alhaurin de la Torre in Malaga has installed roadside signs to try and protect the ducklings in the area. The City Council, through the Department...