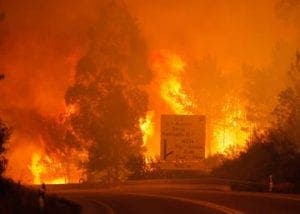 AN environmental group has criticised authorities in Portugal for not doing more to prevent the devastating forest fires which left at least 62 dead.

The country’s leading green lobby group Quercus said today that ‘forest management errors and bad political decisions’ by the government are to blame for the inferno.

It blasted authorities for allowing the planting of huge swathes of eucalyptus, the country’s most common and most profitable species, but one that’s often blamed for stoking blazes. 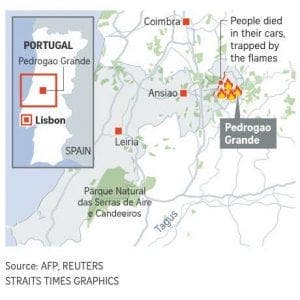 It comes after emergency services have been criticised for not closing a road where 47 of the deaths occured as people tried to flee the flames on Saturday night.

Between 1993 and 2013, Portugal had the most annual fires in southern Europe.

It had more fires than Spain, France, Italy and Greece, despite being the smallest of them all. 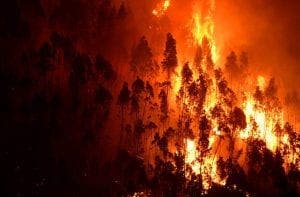 The catastrophic fires, which could be seen from space, come after the government announced a raft of new measures against wildfires in March, but they have not all yet come into force.

Some 2,000 firefighters were still tackling the blazes today.

Around 60 fires broke out across the country on Saturday night, with the worst affected being in Coimbra, 150km north of Lisbon.

Portugal Prime Minister Antonio Costa said it is the ‘greatest tragedy we have seen in recent years in terms of forest fires.’

He warned that the death toll could rise. 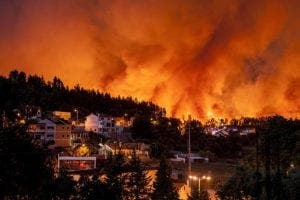 “Stunned by the tragedy in Pedrogao Grande,” he tweeted, “The Portugese people can depend on our solidarity, support and affection.”