BEFORE I ever set foot in Marbella I pictured a ‘tinsel town’ in the Med populated by reality TV stars, distinguished by ostentatious displays of wealth and tarnished by a nightlife akin to the worst excesses of university days. 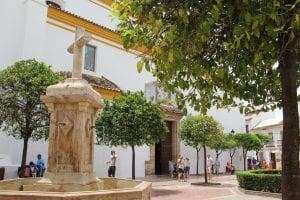 I quickly realised that my understanding was as shallow as some of the tabloid stories I’d read. Look past the sensational headlines and you’ll find a historic town as asset-rich as some of its visitors.

I knew Marbella was popular – but before speaking to Miguel Luna Rodriguez, the city’s tourism chief, I had no idea quite how popular.

“We had more visitors than we’ve had in history last year and this year could be even better,” he told me. 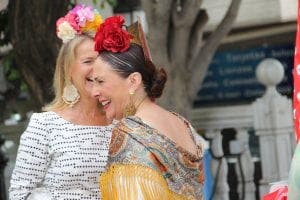 That’s pretty good going and particularly given the resort has more five star hotels than the rest of the Costa del Sol combined.

Tourists come from the whole of Europe for the town’s upmarket shopping, fabulous golf courses, stunning beaches…and fundamentally the temperature, all made bearable by the breeze from the nearby mountains.

In its famous port, these hordes of visitors are easy to find. Puerto Banus is a place where worlds collide. On one hand, there are the 20-somethings covered in tribal tattoos careering from club to club, and stags and hens in ludicrous get-ups making the most of the Marbella movida.

Step back a little though, and you’ll also find the the ultra-wealthy one percent parking their Porsches and mega-yachts to indulge in waterfront dining and designer shopping.

This is the part of ‘Marbs’, as it has come to be known among a certain crowd, that never sleeps, it’s voice speaks loudest when people imagine Marbella.

These are the TOWIE stars and ex-footballers and a Who’s Who of the almost-famous, the B and C-list, if you like.

However, they are not to be sniffed at… When the celebrated Essex soap opera staged a two-episode special in Marbella in 2015, internet hotel bookings rocketed by 72%.

But this is anything but the best of Marbella…

Scratch the surface and you’ll find a Roman settlement drenched in history, epitomised by its enchanting old town.

Whether you are thirsting for history or only a drink, Orange Square, named for its abundance of orange trees, will oblige in either case. 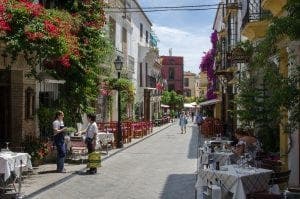 Enclosed by an 11th century Arab wall, the showpiece of the square is the 16th century Old Governor’s House, which dates back to the 16th century. A tourist hotspot, the square’s bars and restaurants charge a little more but it’s worth it for the ambience.

When the heat gets too much, respite can be found within the cool stone walls of Our Lady of the Incarnation church, a 17th century former mosque that was taken over by the Christians during the Reconquest.

Inside, along with beautiful paintings and locals praying, you’ll enjoy the highly-efficient air conditioning. 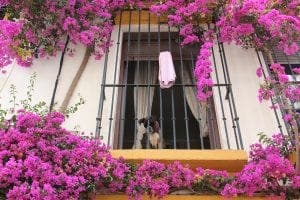 Tributes paid, you can find Marbella monuments even older than this, dating from 1AD. The first Roman bridge can still be found beside the Puente Romano hotel and the baths still stand in Guadalmina.
When you tire of burning shoe leather, jump into a horse and carriage for a town tour or bag a park bench in the green shade of one of its exquisite public gardens. La Constitucion park and the Alameda Gardens are particularly lovely, the latter always brimming with locals and surrounded by great cafes and bars.

From here, you can walk down to the beach through Avenida del Mar, resplendent with five statues by iconic Spanish artist Salvador Dali who was a regular visitor. (Don’t miss the Cudeca charity shop on the left, halfway down, for second-hand designer labels!)

This beauty is the unsung hero of Marbella, a city brimming with more natural wonders than its tabloid image suggests. There is tropical greenery everywhere and its beaches are some of the best in Andalucia. 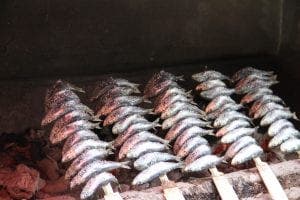 Boasting 27 kilometres of coastline, San Pedro and Puerto Banus both proudly fly the prestigious Blue Flag, an award given to the best beaches by the Foundation for Environmental Education.

This garden of Eden has also blossomed into a gourmet paradise. Marbella glitters with the highest concentration of Michelin Star restaurants in Andalucia, proud of its title as the gastronomy capital of the Costa del Sol.

Along with the annual feria in June and the Starlite music festival held at Marbella’s amazing Nagueles quarry auditorium over a month in summer, Marbella is never boring.

The resort has continued to grow, despite the 2008 crash that brought Spain to its knees. In part, this due to the current town hall which is working hard to do away with the corruption that plagued the city for years.

With incredible nightlife, a blossoming arts scene, and the best food in the region, the party is only getting better in Marbella..