A BRITISH mother has claimed Spanish cops’ allegations that she was wandering through the streets naked and drunk are completely made up.

Sophie Shambley lost her job at the upmarket Anfi Del Mar resort in Gran Canaria after police arrested her for abandonment after she allegedly left her two young children home alone.

Shambley, from Wigan, moved to Gran Canaria with her family only six weeks ago, and claims they have received death threats since the alleged incident.

The 30-year-old insists it was a case of mistaken identity and that she had been in her apartment when the incident is said to have taken place.

Her 32-year-old husband Shaun said they are all devastated by the ordeal.

He told the Daily Mail: “Sophie lost her job and we’ve been receiving death threats.

“It’s all completely lies, we were out with friends and Sophie brought the kids back to put them to bed.

“She put them in bed, went to relax on the balcony and fell asleep. They were never alone. And all this stuff about being naked in the street is ridiculous.

“We sold our house in the UK to move out here for a good life. It’s ruined now, I’m heartbroken for our young children.”

The family accused Spanish police of ‘fabricating’ the allegations.

Shambley has since been bailed pending further inquires and reunited with her children, a boy, four, and a girl, 20 months.

It comes after Spanish police claimed the university graduate had been wandering naked through the popular resort of Patalavaca, 20 minutes away from the family home.

When they arrived at the apartment they claim to have found Shambley ‘drunk and without any clothes on’ while her young son was sitting alone and crying.

A local familiar with the family, who wished to remain anonymous, told the Daily Mail:

“There’s no way she could have been walking around Patalavaca and got back to her apartment by the time police arrived.

“Something doesn’t add up. It’s a good walk and lots of hills.

“It must have been a different woman.” 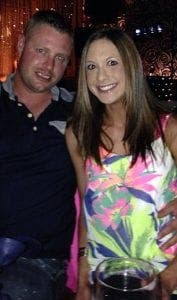 Police were alerted by locals who saw a woman walking the streets and Shambley’s son throwing toys over the balcony.

But the family claimed their son often does this as part of a game with the neighbours, despite them telling him not to.

Mr Shambley said: “He’s only four, he thinks it’s a game with the people downstairs because they throw them back up to him. He must have woken up after Sophie put him to bed.

“The police have completely made this up, maybe they’re selling the story and making some money from it. I don’t know. I can’t think where this has come from.”

A Guardia Civil spokesperson said: “Officers went to the area after receiving calls about a woman who was apparently inebriated and walking naked along a street while her children were throwing objects.

“They went to the place, discovering the door was open and hearing children crying.

“They entered and found it in a mess with two young children who looked neglected.

“The mother was laid on the bed without any clothes on and looked drunk.’
Inquiries into the incident are ongoing.”