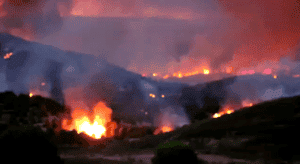 SOME 500 people have been evacuated after another forest fire broke out in Huelva on Monday.

The fire is believed to still be ravaging the area towards Almonaster, and has caused nearby residents to be relocated to the Minas de Riotinto sports hall, among other centres.

Those evicted from the northern area of El Campillo have been able to return to their homes, while Traslasierra hamlet residents are still displaced, with many are staying with relatives and friends.

The Guardia Civil has reopened part of the N-435 road that was closed earlier for safety measures.

It is hoped that the fire will be under control by tonight if the wind does not interfere with the work of the firefighters.