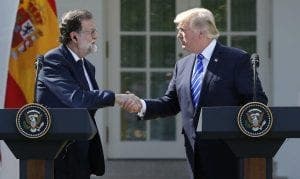 His comments came as Spanish prime minister Mariano Rajoy jetted to the US to meet the American president for the first time.

Rajoy had hoped to get Trump on his side ahead of the upcoming vote on Monday.

And Trump delivered the goods when he said: “I’m for a united Spain, I really think the people of Catalonia would stay with Spain.”

“I think Spain is a great country, and it should remain united,” Trump added during a news conference in the Rose Garden.

“I think the people of Catalonia have been talking about this for a long time.

He added that if accurate polling were done in the region ‘you’d find out people of Catalonia love their country, they love Spain.’

At yesterday’s meeting the pair also discussed Spain’s role in the EU and its commitment to NATO.

The president’s remarks on Catalunya mark a departure from the official position of the United States, which, as recently as Monday, was that a planned nonbinding Catalonia referendum Sunday to separate from Spain was an internal matter.

State Department spokeswoman Heather Nauert had said earlier this month that the United States took no position on the referendum.

Trump repeatedly referred to prime minister Rajoy as ‘president’ as they stood next to each other at the joint White House press conference.

Even after meeting with Rajoy beforehand, Trump couldn’t seem to remember what the leader’s position was.

Trump got it wrong again when asking if a reporter had a question for the “president” beside him.

Even the White House livestream got it wrong, referring to the event as a ‘Joint Press Conference with President Rajoy.’