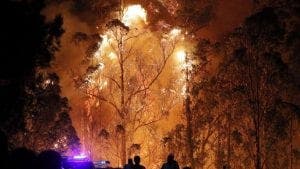 AT least nine people have died following the outbreak of wildfires in Portugal and Spain over the weekend.

Hundreds of fires, which were made deliberately in Spain, were fanned by strong winds from hurricane Ophelia, which is currently hitting Ireland and the UK.

Civil Protection authorities in Portugal said that six people died and at least 25 were injured, most of them firefighters, during fires raging in central and northern areas of the country.

In Galicia, authorities said that three people had died, two of them trapped in a car, as a result of blazes that were threatening inhabited areas prompting the evacuation of thousands, including from the city of Vigo.

The government in Portugal has declared a state of emergency for regions north of the Tajo river after Sunday was described as ‘the worst day of the year in terms of forest fires’.

Government minister Jorge Gomes said that most fires had a criminal cause.

Officials in Galicia said three people were killed as a result of more than 130 fires reported in different areas.

Two were found in a charred car and the other was an elderly man who died when trying to put out the flames in his house.

At least 17 fires were close to inhabited areas, many of them in the Vigo province, leading to emergency services and police to evacuate thousands, the regional government’s environmental department said.