MICHAEL Fassbender and Alicia Vikander have tied the knot in Spain.


The Hollywood heartthrobs got married on an Ibiza farm in front of 100 family and friends.


Irishman Fassbender, 40, and Swede Vikander, 29, were spotted smooching at a beach-side restaurant in the run-up to the eco-friendly wedding.


A DJ and band played ‘pretty much 24/7’ over a three-day celebration which included a Friday boat party and meal at Yemanja restaurant.

There was also a boozy Sunday session. Oscar-winning director Steve McQueen was among the guests, who were asked not to take photographs of the wedding ceremony.
The pair met on the set of 2014 film The Light Between Oceans. 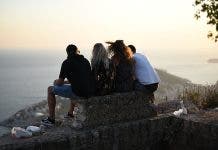