ANOTHER dog has been killed by poison on the Costa del Sol.

The pet podenco Yellow dropped dead within minutes of allegedly ingesting the toxic substance in the area Peñas Blancas, in Estepona.

The five-year-old canine was rushed to a local vet but was dead within minutes of arriving.

Luckily her second dog, Meca, who was also vomiting, somehow managed to pull through.

“It was horrible, so scary and I am demanding something is done urgently,” she said.

The death comes after 15 dogs died in a similar fashion in Nueva Andalucia and Marbella last month in suspicious circumstances. 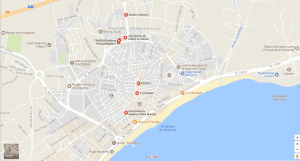 Many of the owners were expats, with a number joining an angry dog walkers’ protest last weekend in Marbella.

While police are still probing the case, rumours have swirled that one of the substances, a weed killer banned by the EU for 20 years, may still be being used by local town halls.

Marbella town hall was forced to deny it used the product, however Estepona town hall this week refused to comment or explain which pesticide they use.

All they would say is that they source their street cleaning to a company called SESPA.

A SESPA spokesperson told the Olive Press meanwhile: “We only use pesticides in the drains to kill cockroaches and rats, we never put them on the street or in the plants and trees.”