A JUDGE investigating how a new mother was cut in half by an elevator has asked police why the computer system operating the lift was erased.

In an official letter to the Policía Científica, the judge asked the force to ‘clarify the reasons for the erasure of the elevator CPU information.’

The CPU is the ‘brain’ of any computer, in this case the one that controls the elevator.

On August 20, new mother Rocio Cortes was being transferred after giving birth to her daughter at the Hospital de Valme de Sevilla.

But as she was half way out of the lift, it quickly closed and attempted to move up, virtually cutting the woman in half and killing her.

But the computer operating system, which would have helped explain why the accident occured, has since been erased.

Although this can happen when there the power supply is disconnected or there is a battery issue, an investigation has revealed neither of these could have caused it. 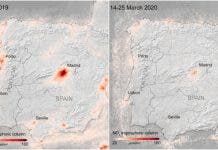 Joanne Oakley - 5 Apr, 2020 @ 11:00
All around the country locals are trying to stay positive by joining together each evening at 8pm to applaud those keeping us all safe

Spain’s five rural gems you need to visit after lockdown