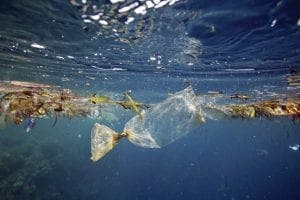 Out of 233 mesopelagic fish caught in the Northwest Atlantic, 73% were found to have plastic particles in their stomachs, ‘making it one of the highest reported frequencies of microplastic occurrence in fish worldwide.’

Researchers from the National University of Ireland in Galway examined dead deep sea fish from midwater trawls from a depth of up to 600 metres.

One spotted lanternfish measuring 4.5cm long had 13 plastic particles in its stomach.

The findings have been described as ‘worrying’ as fish could pass the microplastics throughout the ocean, when the affected fish are eaten by predators.

These fish are prey for fish eaten by humans, which means we could be eating food that has been indirectly contaminated.

Microplastics are small plastic fragments, commonly broken down from larger plastic items which have been dumped into the ocean.