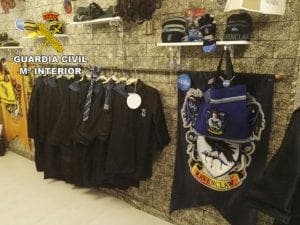 POLICE in Spain have seized more than €300,000 worth of Harry Potter merchandise in a toy shop raid.

Almost 10,000 items worth €305,000, purporting to be from Disney or Warner Bros were uncovered during a major operation against counterfeit goods.

Photos distributed by the Guardia Civil showed, among other items, cloaks and ties worn by the pupils of Hogwarts, the school created by British author JK Rowling.

Banners, scarves and hats bearing the colours of Gryffindor, Ravenclaw, Hufflepuff, Slytherin, the four houses of Hogwarts, were also being sold at the Barcelona store.

Fake magic wands and even a replica of the young wizard’s owl, Hedwig, were also on offer.

Wands were sold at €35.99 while the caged Hedwig was marketed at €97.99. But they were in fact cheaply made forgeries, the majority from China.

A 38-year-old Spanish woman, the toy shop manager, has been arrested.

She is being investigated for a crime against industrial property.

The raid, by officers from the Guardia Civil’s Tax and Borders unit, took place on February 27 but was only revealed on Wednesday.

A spokesman for the Guardia Civil said: “This raid was part of a wider operation against fake goods which are arriving mostly from China to Spain by sea and other routes.”