A RANGERS bar in Benidorm was ‘torched’, before police ‘fired rubber bullets’ at Celtic fans in Valencia.

Dramatic pictures show the fire damage to the city’s Golden Last pub as thousands of Scots arrived in Spain for the Europa League clash with Valencia.

Staff at the football boozer say the incident, which happened on Wednesday morning has caused extensive damage.

Costa Blanca locals claimed that the flags outside the bar had been set alight.

It comes as six Celtic fans were arrested, including one for ‘cocaine and crystal meth’ after clashes with police who appeared to fire rubber bullets.

A spokesperson for the Valencia National police said: “We have six people under arrest, five of them for public disturbance.

“The other person was found to have drugs, specifically Cocaine and Crystal Meth.”

Social media videos appeared to show police firing rubber bullets at Celtic fans and beating and kicking them as they lay on the floor.

In one video gunfire can be heard and in another, police descend on a bar using truncheons, as fans are stood, drinking.

One said online: “Police went nuts for nothing at st Patrick’s, smashing people with batons wtf!! old man got the s*** kicked out him.”

It also emerged on Wednesday that there would not be a fan zone for the roughly 10,000 football fans journeying from Scotland to Spain.

“Despite our best efforts, we’ve been unable to get any confirmation from Valencia or local police regarding a fanzone so this doesn’t look like it’s going to happen,” Celtics’s liaison officer, John Paul Taylor, said.

The last-32 of the Europa League competition kicks off at 6:55 Spanish time at the Mestalla stadium and will be shown on BT Sport ESPN. 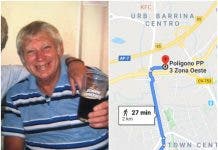