SPAIN has been crowned the world’s healthiest country ahead of Italy.

That is according to the 2019 Bloomberg Healthiest Country Index, which ranks 169 countries on various health factors.

The index penalises risks like obesity and tobacco use, but gives positive weighting to longer life expectancy.

Spaniards have the highest life expectancy at birth in the EU and are only behind Switzerland and Japan globally.

Spain has jumped up five places from the 2017 index, when it was ranked 6th healthiest in the world.

A ‘Mediterranean diet’, rich in olive oil, nuts, oily fish and vegetables, is thought to be behind the health benefits of Spain and Italy.

This results in ‘a lower rate of major cardiovascular events than those assigned to a reduced-fat diet,’ a University of Navarra medical study found.

The UK meanwhile is ranked 19th, Portugal 22nd and the US 35th, in this year’s list.

The 30 most unhealthy countries include 27 Sub-Saharan nations, while Yemen, Afghanistan and Haiti are the other three. 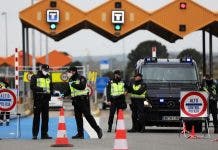 Find out which regions in Spain experienced the highest decrease in commuting to work, going to the shops, to the park, or even to...