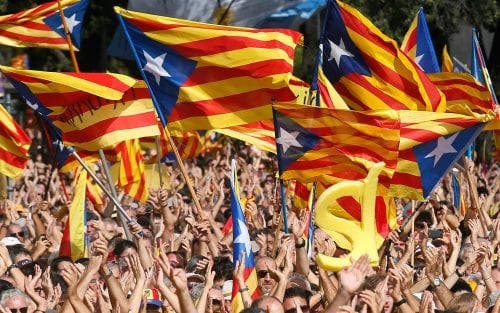 TWO Catalan separatists have been caged after confessing to making explosive devices and testing them.

According to police, the two men belong to the violent wing of the Committees to Defend the Republic (CDR) and were planning acts of violence for the October 1 anniversary of the 2017 independence referendum.

The dangerous pair were among nine members of the CDR who were cuffed in a raid on Monday.

El Pais reported officers have video evidence of the suspects testing the explosives, as well as witnesses who purchased the necessary chemicals to make the bombs.

Tests conducted on the substances have since confirmed the presence of ammonium nitrate, a common fertilizer that can be used to make explosive mixtures such as ammonal.

Documents showing how to make industrial explosives such as Goma-2 were also found.

The type of planned acts of violence and where they would have struck are not yet known.

However officers had been investigating the nine individuals for more than a year.

The detainees had allegedly been making explosive mixtures for months and had tested the material in abandoned quarries.