ALICANTE City Mayor had to take to social media AGAIN yesterday, as thousands of children and adults took to the streets.

After 43 days of confinement, children under 14 were allowed out with an adult, in light of improving mortality figures throughout the country.

However, the streets of the province were filled with people blatantly breaching the revised regulations, forcing the council to consider immediate measures preventing the situation worsening.

Rules are clear: children can go no further than one kilometre from home, accompanied by only one adult and everyone adhering to the two metre safe-distancing rules.

The council had to tweet a warning, however, after so many breaches were spotted by Local Police.

The key parts of the tweet read, “We appeal to responsibility … You cannot go more than a kilometre from home and you cannot take the car to move to other areas … Parks and beaches are closed.”

The day before the change in regulations, the mayor had to publish confirmation that Alicante beaches were closed – despite the misinformation spread elsewhere.

Police had to warn the public in many areas that had been subject to overcrowding.

Sanctions were threatened to both adults and children if breaches were to continue.

Throughout yesterday, local media reported entire families with children were out, bending the rules by having the father with one child and the mother with another child in front.

They also report people without children sunbathing on benches, groups of children playing together and endless other irregularities.

In his statement, mayor Luis Barcala warned of, “conduct that endangers the population.”

He continued, “we continue in confinement and fighting against Covid-19, and since there are still infections and deaths, we must all be aware and responsible to avoid taking steps back. 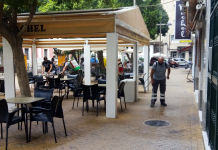