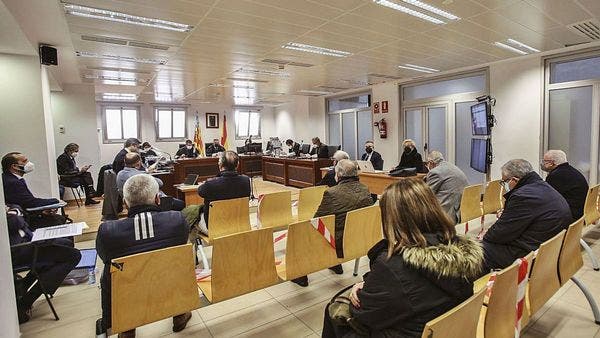 THE trial of ex-Calpe mayor Javier Morato for his alleged role in a fraudulent €4 million waste contract has been delayed yet again.

That’s because the Alicante courtroom is not big enough to safely accommodate everybody due to the coronavirus pandemic. .

September 20 has now been pencilled in as a new commencement date after a false start on January 21, and the inability to find a suitable courtroom for February 16.

Oral hearings in the case were first announced in 2016, but the start of proceedings in the biggest-ever corruption case in the history of the Marina Alta region have always hit the buffers.

The trial eventually looked set to begin last April but was postponed due to the pandemic.

On January 21, the hearings actually started, but defence lawyers for the eight defendants quickly pointed out that safe distancing could not be observed in the courtroom,

They complained that they did not have enough room to place their papers and computers, and that they had to share a microphone.

Their objections were supported by the prosecution and a search began to find a larger courtroom with the aim of resuming the hearing on February 16.

That move has come to nothing with all parties now being told that the start of the trial has been put back to September 20.

Besides ex-mayor, Javier Morato, charges have been laid down against the ex-boss of the Colsur waste company, Angel Fenoli, and his son Antonio.

Colsur’s Angel Fenoli was acquitted in an Elche court last summer in what were Alicante Province’s biggest-ever corruption hearings.

Branded as the ‘Brugal Case’, the investigation concerned the awarding of Orihuela’s waste disposal contract.

Fenoli was cleared along with two former Orihuela mayors and 31 other defendants of bribery charges dating back to 2006, after important phone-tap evidence was ruled inadmissible by judges.

Phone-taps are crucial to the Calpe case, with Javier Morato facing corruption charges over garbage being transported to Orihuela and financial records allegedly being fiddled around 2006.

It’s alleged that waste shipments were inflated at twice the actual number in a ruse that siphoned €4 million out of public coffers.

Another plank in the case revolves around the 25-year contract award to Colsur in 1988 and bribes that Angel Fenoli made to Morato and his colleagues at the time. Javier Morato is accused of pocketing €600,000 alone.

He retired from Calpe politics ahead of the 2015 local elections.

The public prosecutor has asked for a total of 58 years in prison for the defendants over Calpe council being defrauded of €4 million.

They are accused of bribery, embezzlement, prevarication and money laundering.

Up to 30 witnesses are expected to be questioned during the trial, assuming that none of them(or for that matter, the defendants) have passed away during the long wait to take to the stand.