The 37-year-old American actress spent a long weekend in Marbella hanging out with  her boyfriend from the famous Cruz clan.

They arrived via the Cannes film festival, before heading off on the AVE fast train to meet Cruz’s famous sisters Penelope and Monica in Madrid.

But not before a station worker insisted on getting a picture of herself with Longoria (below).

The star was in Marbella for a press conference promoting a charity walk-a-thon on August 18. Proceeds from the event will go to the Eva Longoria Foundation, which helps disadvantaged Latin American women. 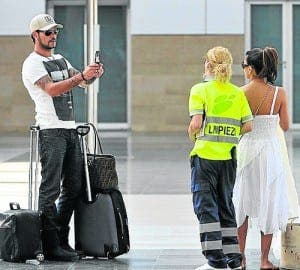