A 28-YEAR-OLD Briton wanted for strangling his mother in the UK has been released after a blunder by Spanish police.

Sean Heiss was arrested in San Sebastian on a separate charge of threatening behaviour and apparently let go just days before a European warrant was issued for his arrest.

It is not clear who is to blame for the blunder or whether in fact the warrant actually reached Spain after Heiss was released as exact dates have yet to be clarified.

But Metropolitan police issued a statement on June 22 saying the suspect was already in custody in Spain.

It comesa after the victim, Margaret Sheehy, 58, was found dead in her London home on June 12. 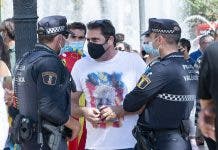