AN investigation has been launched after a video went online showing two Spanish five-a-side football teams at a 1934 state-subsidised private school raising their arms in a fascist salute.

The clip also shows the Spanish national anthem being played with the words used during the Franco era.

IU party deputy leader Esther Lopez Barcelo has called for an ‘immediate investigation’ into the incident, which happened in Alicante.

“Schools, whether they are private or public, cannot tolerate any sort of fascist statement,” said Barcelo.

The Education Ministry said it was aware of the incident but that it had no authority over the teaching staff as the school was private and it would be down to the board of directors to take action.

A spokesman for the school refused to comment ‘until we have met with the board of directors’.

See feature Raising the issue of fascism in Spain 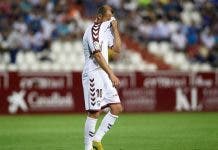