CAMPAIGNERS fighting against the decision to allow drilling off the Costa del Sol have visited the proposed spot today.

Around 70 protesters left the ports of Benalmadena and Fuengirola early this afternoon before travelling 9km offshore.

The group, who fear gas exploration could be ‘disastrous’ for the area’s tourism industry, hope the trip will raise awareness about Repsol’s plans.

Citizens Against Oil Exploration on the Costa del Sol have already staged a string of protests in Mijas and Fuengirola, and have several more lined up later this month.

“Expats should be more aware of what’s actually going on, there’s more to Spain than bars, beers and beaches,” said 66-year-old Leonard Caine from Huddersfield.

“It is going to create jobs and that is needed here in the south of Spain, but this is not the best way to go about it,” he added.

“I understand it will create jobs, but it will not be local workers, it is a specialist field and they will just bring people in,” added fellow expat Christine Baker, 62, from Wakefield.

Talks were given as the boat reached the proposed position of the first testing platform, along with videos demonstrating the effects drilling could have on local wildlife. 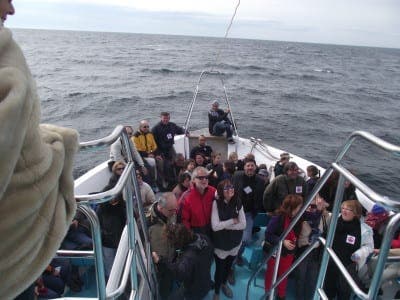 The oil giant’s plans have been halted temporarily however, as the company is only allowed to drill between February and April, and they are yet to begin constructing a testing platform.

If Repsol find gas in the area, they would be permitted to drill continuously for 40 days to test for consistency.

Minister of Industry, Energy and Tourism, Jose Manuel Soria, has already stated he is against the plans, with several local PSOE mayors following suit.

The group plan to meet again in Benalmadena on February 22 and February 24.