THE BBC Top Gear crew have landed in Gibraltar to film their latest episode today.

Presenters Jeremy Clarkson, Richard Hammond and James May have been spotted on the Rock as they prepare to test an Audi R8 against the McLaren Mp4-12c on the runway of Gibraltar International Airport.

The filming will form part of the episode in which the presenters will drive from Gibraltar through Spain and back to the UK.

Clarkson, 53, even received a personal welcome from airport staff.

The controversial TV host tweeted an image of himself smoking next to a sign which dedicates the area: ‘Clarkson’s Corner’. 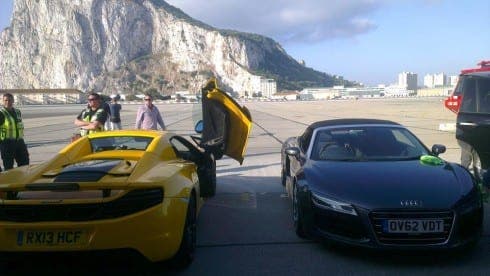