AS I tailgated a silver Renault Megane on a slow crawl to the Gibraltar border, I cursed my luck for landing at the back of a 35-minute queue.

Frustrating as it might have been, the queues however, are a good deal better than they were a year ago… not to mention three decades ago when the Gibraltarians were unable to cross the frontier at all.

When Spanish dictator General Franco closed the land border between Gibraltar and Spain in 1969, he divided families and friendships at a stroke.

Gibraltarians were cut off from loved ones in La Linea, as were Spaniards with relatives on the Rock. For 16 long years – an entire generation – were forced to communicate by shouting through the border gates. They shared their joys, sorrows and glimpses of their new-born babies through cold iron bars.

When Franco died in 1975, Gibraltarians hoped their enforced incarceration would end but extraordinarily, it wasn’t for another 10 years – on February 5, 1985 – that the border gates finally swung open.

The frontier is inextricably linked to the Rock’s past and present and probably its foreseeable future too but get over it – there’s a lot more to see when you do!

My tip is to avoid taking your car in at all. You don’t even need to join the queue, as Gibraltar is easily walkable, given moderate fitness (and there is always the Number 5 bus from the border to the centre costing just a pound).

Indeed, one of the surreal attractions is crossing Europe’s shortest airport runway – the only way into town for both motorists and pedestrians. 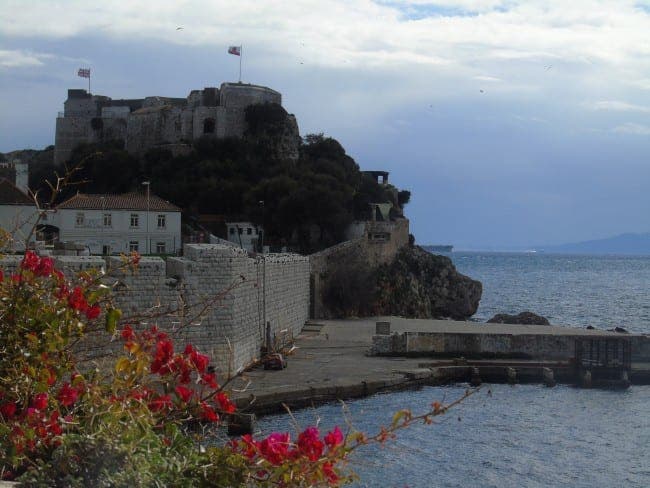 At this point, there are three principal options: take on Main Street; conquer the Rock summit; or  circumnavigate it (by car or on foot) to its southernmost tip to see what lies beyond (Africa).

Main Street, the eponymous shopping artery, is a home away from home for British expats and holidaymakers with its Marks & Spencer, Topshop and British Home Stores.

Recognisable international retail names are interspersed with those of quirky local emporia – Seruya, Stagnetto and Marble Arc – and other merchant traders established way back when.

Meanwhile a hike up the Rock – not for the faint-hearted – affords amazing views over the border to the La Linea road, which snakes down through the Spanish countryside towards the bustling frontier.

Although the cable car is a much easier route to the summit, trudging up the back roads on foot offers a more far-reaching glimpse into Gibraltar’s military past.

A number of abandoned batteries scream out to be explored, alongside tours of the WWII and Great Siege tunnels.

Just in front of the entrance to the WWII tunnels is a plaque commemorating the day, in 1954, that HRH Queen Elizabeth and the Duke of Edinburgh stood and looked out over one of Britain’s most famous overseas territories.

It was a long time ago. But standing here, watching Gibraltarians kicking a football in distant Victoria Stadium, the Union Jack flapping in time with the red and white banner of Gibraltar, is enough to make even the most unpatriotic of Brits proud.

This is merely a stop-off for a breather on my voyage to the top of the Rock, a series of seemingly never-ending hills that begin to take their toll on the backs of my calves.

Then, just when the thought of a cold beer back in Ocean Village seems too tempting to ignore, I’m jolted back to reality by a bunch of Gibraltar’s most famous residents… the Barbary macaques.

Atop the Rock, the monkeys run the show. They know how to open tourists’ backpacks in search of food, they love wrecking car aerials and one of the younger macaques – buzz off – seems to be showing too much interest in my specs.

Panic over! They’re a friendly bunch if you don’t let them get too familiar. Just being with them up here is supremely cool, as is the view across sandy Catalan Bay to Morocco. But it’s time to move on to St Michael’s Cave.

With one million visitors each year, this underground gallery created by rainwater erosion is the most visited of the 150 caves inside the Rock. A 100-seater auditorium sits in the centre of the largest cave. Its natural acoustics make it the ideal concert venue and it has hosted all kinds of events, including the Miss Gibraltar beauty pageant.

The next stop on my round-trip checklist is the Moorish Castle. The Union Jack flying above its battlements is another reminder of Gibraltarian patriotic fervour while the cannons still in place underscore its amazing military history.

From here, you can look down at the coloured apartment blocks rising up like stalagmites from the lower Rock, and the construction cranes at work building new ones, a timely reminder of how far Gibraltar has come in the 30 years since the border reopening.

Time to start my descent, it would be easier to hitch a ride on the cable car but the Mediterranean steps are far more impressive. Staked out by inquisitive Barbary apes which refuse to budge, this stairway to heaven and back zig-zags down the front of the Rock’s face, offering spectacular views.

Built by the British Army as a means of reaching several military points, the crumbling staircase was restored in 2007 to offer safer passage to fitness fans who enjoy taking the Med Steps Challenge. Chief Minister Fabian Picardo and his wife Justine are among them!

Back in town, having given the last monkey the slip (not including fellow Olive Press reporter Tom Powell), my final port of call is Europa point.

The site of the future university, also earmarked for a 8,000-capacity football stadium, this wild open beauty spot is symbolic of the dramatic transformation going on in Gibraltar, which has one of the most upwardly mobile economies in the world – some 10% growth last year alone – and is spending its riches accordingly.

As leader Picardo so rightly said recently, echoing the lyrics of Bob Dylan: ‘The times they are a-changin’.’

With annual international music and literary festivals attracting the world’s top artists, the Rock has carved out a place for itself on Europe’s cultural calendar, too.

Last month, 20 grandmasters flocked to Gibraltar to take part in the annual Chess Festival at the Caleta hotel. Next month, the world’s top darts players will meet up at the Tercentenary Sports Hall for the annual Gibraltar Darts Trophy.

And with the national football team competing in European qualifiers for the first time ever, things are also looking up in the sporting arena.

All around the Rock, times are a-changin’ for the better. My day in Gibraltar may have taken its toll on my calves and worn out the soles of my Converse.

But as I sat in yet another border queue – thankfully just 30 minutes – to cross back into Spain, I felt only admiration for the tiny British territory which keeps on rolling with the punches and rocking with the times.