QUIDDITCH is the latest fad at Madrid’s Computense University. 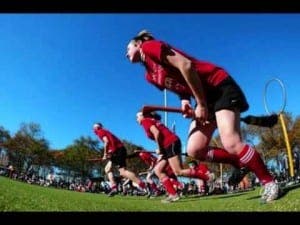 The fictional wizarding sport coined by JK Rowling in her Harry Potter books has been brought to life by students in Spain’s capital.

Compete with logo-emblazoned scarves, purple brooms, bludgers and a golden snitch, the only element lacking authenticity is their proximity to the ground.

The Madrid Lynx team take the sport seriously and admit it can be violent, similar to a haphazard combination of rugby, handball and tackling.

The players have travelled around Europe to compete against other teams similarly enthused and the mystical sport looks to be casting its spell internationally.

The full contact game of ‘muggle quidditch,’ as it has become known, was first played in Vermont in 2005, is headed up by the International Quidditch Association but has not yet made it to the Olympics.