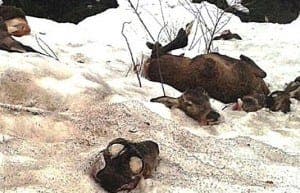 ANIMAL rights groups are outraged after poachers decapitated more than 100 deer in Spain.

Police have now launched a hunt for the poachers, who left the corpses of the deer scattered across the countryside in Castilla y Leon.

A group of walkers were horrified to discover the dismembered bodies while on an afternoon walk in the woodland.

One walker, Narela Hinojosa, 37, said: “It was like something out of a horror film.

“We came to a clearing in the forest and just saw all these heads and bodies littered all over the place.

“I nearly vomited, it was so gross and the smell was unbearable.

“Most of the heads had antlers missing and some of the carcasses had no legs.

Animal rights activists are vowing to bring the poachers responsible to justice.

A SEPRONA spokesperson, the branch of the Guardia Civil responsible for the environment, said: “Preliminary investigations suggest the animals were trapped in snow and weakened by lack of food.

“Hunters took advantage of this and killed them before chopping them up.

“We also have reports from locals saying they had seen people driving cars full of deer heads.

“It is not the first time in these mountains that poachers have taken advantage of the snow and killed animals that are tired and hungry.

“But we have never seen it on this scale before. This type of hunting is illegal and forbidden as the animals have no chance of escape.”

IN PICS: Is this the tackiest hotel in Spain?

Kirsty Mckenzie - 22 Oct, 2021 @ 20:00
CHRISTMAS is just around the corner and many of us look forward to taking advantage of the great discounts in the famous Black Friday sales. Despite...