Tragically, one toddler died and several adults were injured.

The three-year-old died in Huelva after building materials swept up in the winds hit him on the head.

Meanwhile a Cantabrian fisherman, 73, disappeared while out at sea and a Galician windsurfer, 47, was dragged so far by the wind that he was dumped on the roof of a nearby cottage, according to a local newspaper.

He suffered a broken leg and a head injury.

The Malaga area continues to be on yellow weather alert with risk of strong winds. 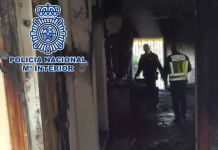